“The Star Spangled Banner” is the national anthem of the United States of America. It was written by Francis Scott Key, a 35-year-old American lawyer.

In September 1814, Key, along with a negotiator boarded a British ship to negotiate the doctor’s release. Once on the ship, Key and the negotiator were held during the battle.

After the British bombardment the fort during the night, Key saw the American flag, not the British Union Jack, flying over the fort the next morning by the dawn’s early light. The flag measured 30 x 42 feet. 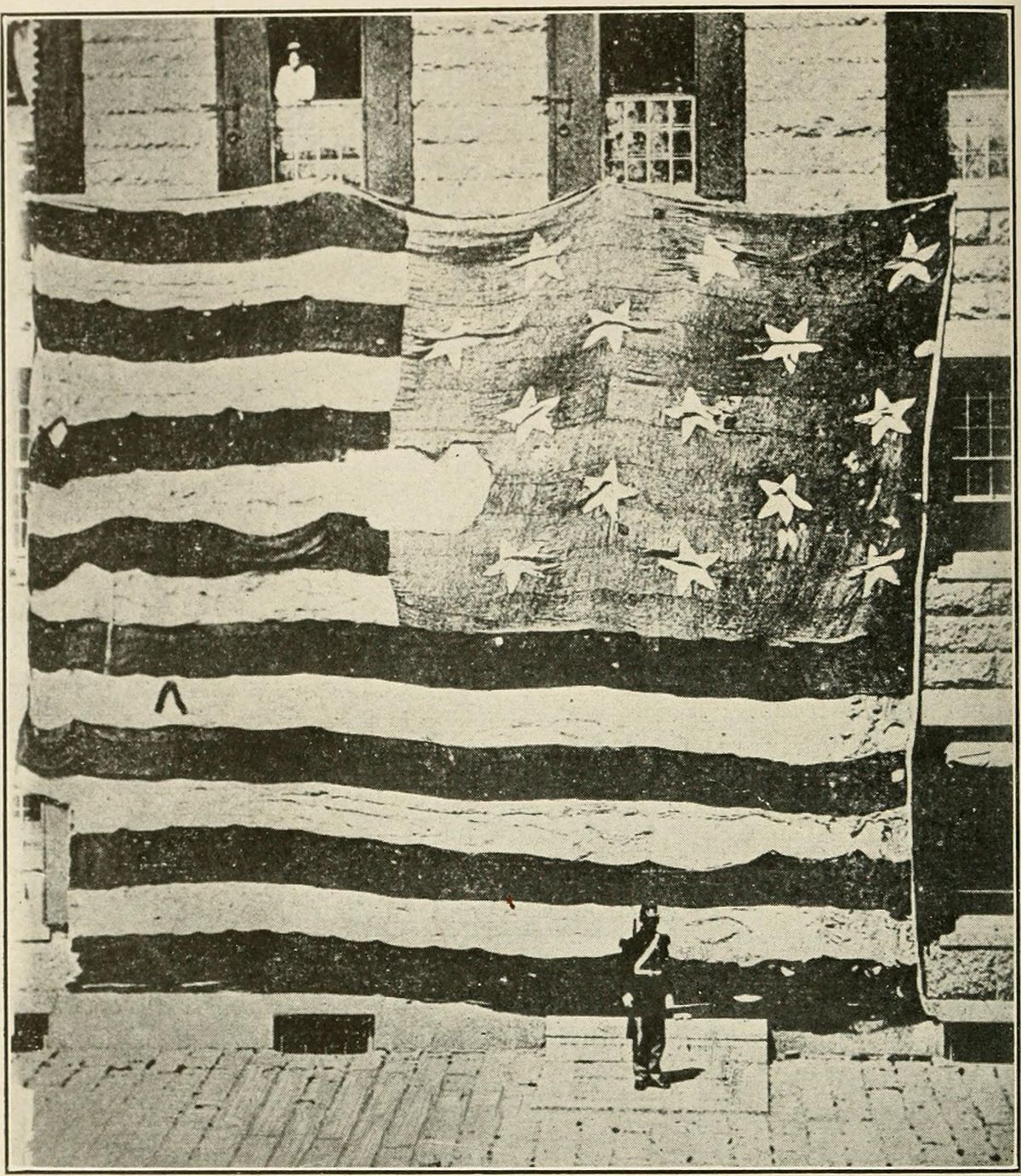 The historic event inspired him to write “The Star-Spangled Banner” while still on the ship. The initial verse was scribbled by Key on the back of a letter. Once back in Baltimore, he added more verses. By the middle of October 1814, the song had been published in nearly 20 newspapers on the East Coast of the United States. 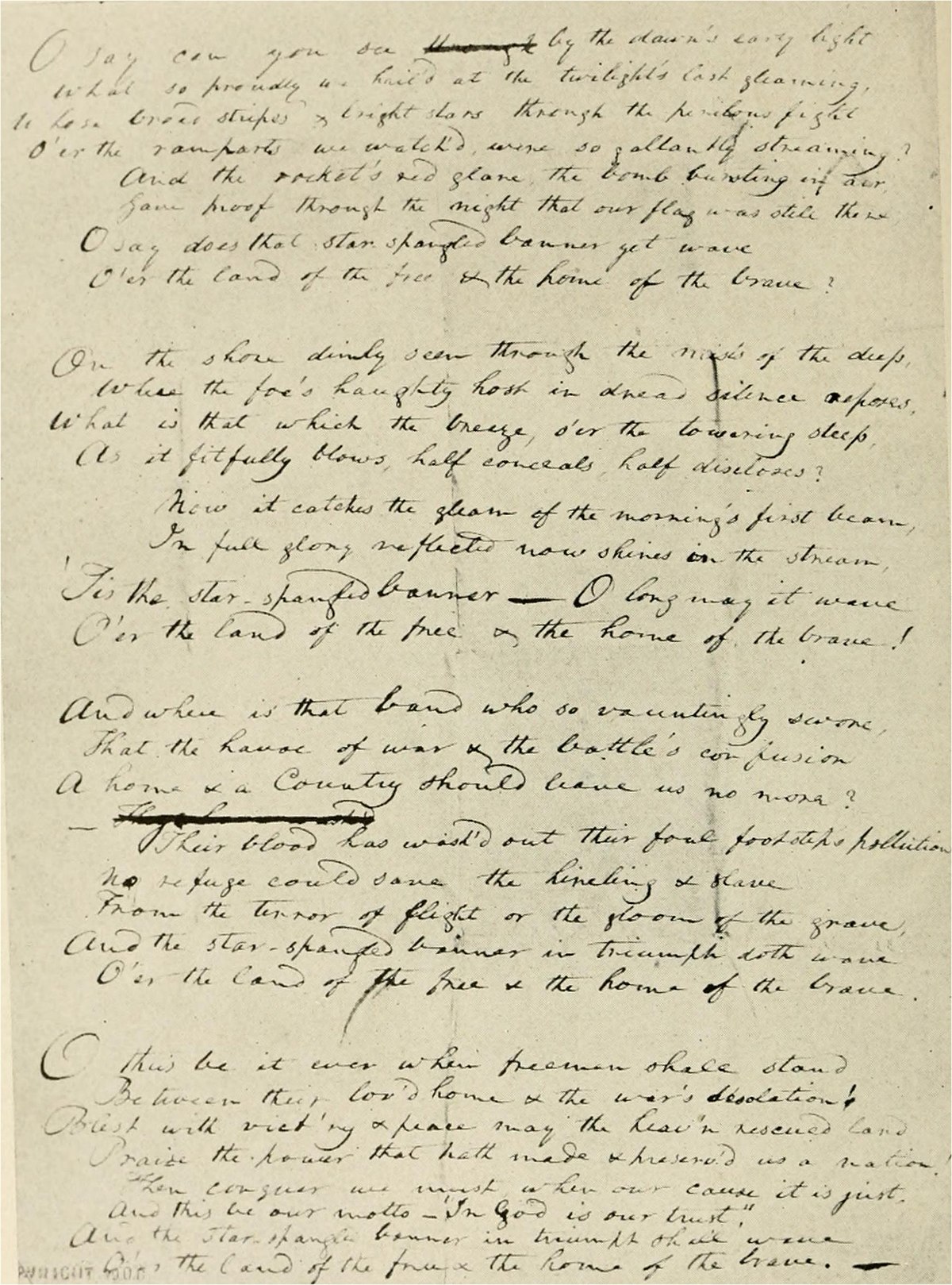 The flag that inspired Key is worn and fragile but still survives. It is displayed in its own gallery at the National Museum of American History in Washington, D.C. 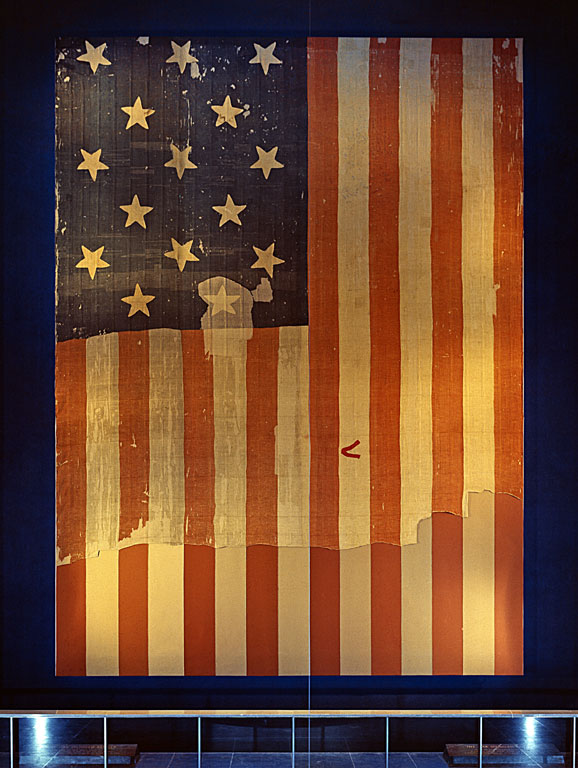 Here is the complete version of the song showing spelling and punctuation from Francis Scott Key’s manuscript in the Maryland Historical Society collection:

O say can you see, by the dawn’s early light,
What so proudly we hail’d at the twilight’s last gleaming,
Whose broad stripes and bright stars through the perilous fight
O’er the ramparts we watch’d were so gallantly streaming?
And the rocket’s red glare, the bomb bursting in air,
Gave proof through the night that our flag was still there,
O say does that star-spangled banner yet wave
O’er the land of the free and the home of the brave?

On the shore dimly seen through the mists of the deep
Where the foe’s haughty host in dread silence reposes,
What is that which the breeze, o’er the towering steep,
As it fitfully blows, half conceals, half discloses?
Now it catches the gleam of the morning’s first beam,
In full glory reflected now shines in the stream,
‘Tis the star-spangled banner – O long may it wave
O’er the land of the free and the home of the brave!

And where is that band who so vauntingly swore,
That the havoc of war and the battle’s confusion
A home and a Country should leave us no more?
Their blood has wash’d out their foul footstep’s pollution.
No refuge could save the hireling and slave
From the terror of flight or the gloom of the grave,
And the star-spangled banner in triumph doth wave
O’er the land of the free and the home of the brave.

O thus be it ever when freemen shall stand
Between their lov’d home and the war’s desolation!
Blest with vict’ry and peace may the heav’n rescued land
Praise the power that hath made and preserv’d us a nation!
Then conquer we must, when our cause it is just,
And this be our motto – “In God is our trust,”
And the star-spangled banner in triumph shall wave
O’er the land of the free and the home of the brave.